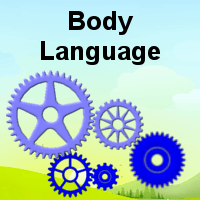 Being aware of your body language is very powerful, whether you want to make a good impression, or keep your thoughts to yourself. It forms a large part of the nonverbal communication between you and others. There are sometimes cultural differences in body language.

Your body language conveys much more information than you might want to give away, or even the wrong information.

For example you may give the impression of being bored or uninterested if you sit slouched, looking at the floor. The reality might be that you are shy, embarrassed, nervous, but that’s not what others will conclude.

You may not agree with what is being said, but would not dream of saying so in this company. But if the expression on your face is raised eyebrows, a frown, a sceptical look, and your arms are folded, then you are saying so, albeit inadvertently.

You want your body language to say what you want to say, and be confident and assertive like you.

Handshakes are popular in the US and are appropriate for use between men and women. However, in Muslim cultures, men and women may not shake hands or touch in any way. In Hindu cultures, Hindu men must not shake hands with women. They greet women by placing their hands as if praying.(Wikipedia )
Your handshake is usually the first contact with someone new. It has a symbolic meaning, and is an important introductory ritual in social contacts. It is worth investing a little time perfecting your handshake, as research shows that the quality of the handshake makes a real difference to the impression you make with new contacts.

It is believed that the handshake originated as a greeting in the days when a weapon would traditionally be held in the dominant, usually right, hand. So it has become a tradition to show that we are greeting someone without carrying a weapon, and that we are peaceful and friendly, by shaking with the right hand.

The handshake is an almost universal form of greeting, and people will judge you by your hand shake. There is an etiquette for shaking hands that, if followed can advance your career. If someone doesn’t know how to shake hands properly, it reflects on their business etiquette, acumen and self-growth.

When you are being introduced, it is customary to stand rather than remain seated, remove gloves, and carry drinks or papers in your left hand to enable a handshake

Hold your palm out vertical to the ground and extend your arm forward. This indicates a meeting of equals.

If you tilt your hand slightly so that your palm points upwards, this is a subtle body language message demonstrating humility, and says that you are there to help and serve.

A firm, but not crushing, handshake shows confidence and is preferable to a limp handshake, which can indicate lack of interest in the other person, and of building rapport or doing business with them.

Sometimes people will offer a second hand that sandwiches yours between them, to emphasize their sincerity.

It is believed that your handshake actually reflects certain personality characteristics, but it can still be a practiced and developed skill.

Your body language gives clues about your thoughts and reactions. Body language is often referred to as open or closed.

An Open posture is when the trunk of the body is open and exposed, and indicates friendliness, openness, and interest

A Closed posture is when the trunk is hidden, usually by hunching forward and crossing the arms and legs. This can be an indicator of a closed mind, hostility, disinterest or anxiety.

Facial expression Movements of eyes, eyebrow, lips and cheeks indicate different moods such as happiness, sadness, perplexed or angry. Covering your mouth suggests you may be suppressing feelings or are uncertain – maybe thinking hard and unsure what to say next.

Body postures Emotions can also be expressed through body posture, For example, a person feeling angry might exhibit dominance over another, while the posture of a fearful person might exhibit avoidance tendencies.

A person sitting to the back of their chair, leaning forward, their head nodding along with the discussion implies that they are open, relaxed and ready to listen.

But a person who has legs and arms crossed, with their foot tapping implies that they are impatient and emotionally detached or “closed “from the discussion.

A person standing with arms akimbo and with feet pointed towards the speaker suggests that they are attentive and interested in the conversation.

However, a small difference in posture can change the meaning. If they have their leg crossed over the other, and place their weight on one leg, this suggests a more casual attitude.

There are sometimes cultural differences in body language.

Your body language can give away what you are thinking and feeling. You need to control it because it forms a large part of the nonverbal communication between you and others.

People will judge you by your hand shake, it reflects on your business etiquette, acumen and self-growth.

Emotions can also be expressed through body posture

Small differences in posture can change the meaning significantly