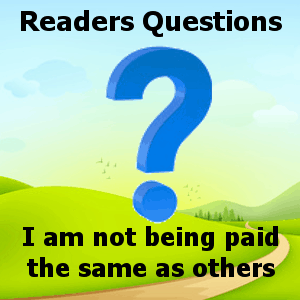 “I am a graduate, and joined a company as a temporary worker on their minimum pay grade, doing a processing job which did not utilise my degree but I could not find anything more suitable Then I was offered a permanent job doing the same work, for the same money , which I took.

Now I have been given a promotion so earn a little bit more money. But I have found out that I am on the wrong pay grade because graduates who come into the company at this level are paid more than the rate I am on.

Many companies are secretive about pay grades and individual remuneration and benefits packages, and actually forbid employees to discuss their pay with others. This is to prevent such situations as this arising, and managers being challenged about their pay by employees.

Other companies are open and transparent about the pay structure and would be open to this conversation.

I don’t know which is the case here. Have a quiet word with your line manager and ask him how he sees the situation. He may immediately offer to move you on to the correct pay, or he may argue he does not have money in the budget to increase your pay. Or he may say he doesn’t set the pay rates and doesn’t have authority to pay you more.

If you have a Human Relations or HR Department, you could suggest you discuss it with them. Or your manager might want to do that himself.

Or it may be the relevant Director who holds the budget for pay and makes the decisions.

You need your manager or you, to discuss the situation with whoever sets the annual pay rates and holds the budget.

Ideally you would like the company to agree the increase and backdate it to when you took the promotion. Keep a note of the date you raised the issue, they may at least pay it from that date.

The outcome will depend on many factors such as company policy, potential union involvement, precedent, available budget, personalities, and how the situation is handled. So be polite and business-like, maintain confidentiality by not discussing with colleagues, and be patient.

So just put your query forward and take it from there.